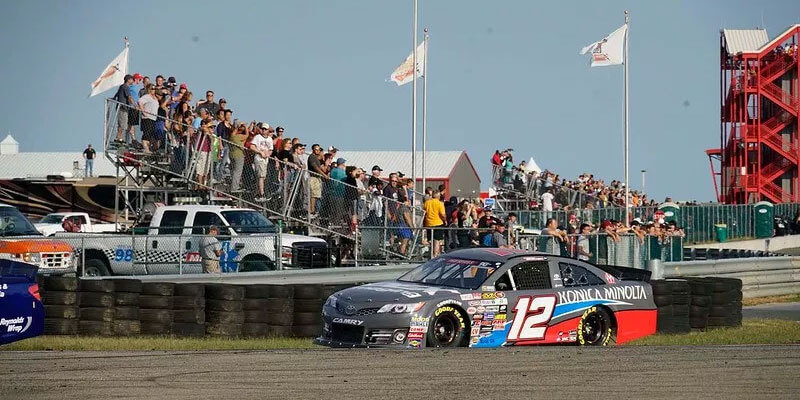 – New Jersey Motorsports Park (NJMP) General Manager, Mark Verrastro, announced the 2018 season schedule today as NJMP moves into season 10. The schedule will feature 15 on and off track events that Verrastro believes will spark the interest of non-racing fans and racing fans alike.

“New Jersey Motorsports Park continues to build and grow every year creating a schedule full of thrilling on and off track events. We look forward to hosting NJMP schedule mainstays such as the MotoAmerica Series, Vintage Racer Group, NASCAR K&N Pro Series, American Historic Racing Motorcycle Association (AHRMA), and three Monster Truck and Thrill Shows,” said Verrastro. “The 2017 season was a huge success and included many enhancements and additions to improve the overall fan experience. From open paddock access, free parking, and low ticket prices we have seen record crowds throughout the facility. With that said, 2018 is going to be one of the most anticipated seasons yet, with the return of the NASCAR K&N Pro Series and the addition of several new off track events.”

The first race to hit the pavement at NJMP features two wheeled action, April 28-29, when the Championship Cup Series comes for the first of four race weekends. In May, 24 Hours of LeMons: Real Hoopties of New Jersey (May 12-13) and WERA Motorcycle Roadracing (May 26 – 27) heat up the 2.25-mile Thunderbolt Raceway.

The NASCAR K&N Pro Series East rolls into NJMP June 16, bringing extreme door-to-door racing to the intimidating 12-turn Thunderbolt Raceway. The series introduces NASCAR fans to the next generation of stars, and the diverse mix of short tracks, road courses, and national series speedways appeals to a broad range of motorsports fans.

MotoAmerica Championship of New Jersey returns for a double-header race weekend September 7-9. Taking center stage, the top Superbike Racers in North America, battle for the Championship title during round nine of the 10-round series. The major race season will wrap up October 20, as the South Jersey Region SCCA returns for Devil in the Dark 12-hour Endurance Race.

In addition to all the on-track action, 2018 will bring a wide variety of off-track events for non-race fans and race fans alike.

“NJMP is unique because we are versatile, and we are thrilled to provide a wide variety of on and off-track events to our fans in 2018,” says Brad Scott, Chief Operation Officer. “NJMP saw record crowds in 2017 with the return of the Zerbini Family Circus and KSR Motorsports Monster Truck and Thrill Shows. We look forward to providing another year of on and off track excitement that our fans have come to know and love.”

The NJMP Food Truck Festival will deliver a tasty start to the season on May 5, featuring 10-15 food trucks, live music, on-track action and more! The Zerbini Family Circus offers two days of family fun, May 13-14. Rounding out the summer, KSR Motorsports Monster Truck & Thrill Shows will be churning up the dirt July 27-29 delighting kids of all ages.

NJMP is planning the most anticipated off track event schedule in 2018 with the addition of a NJMP 10 year Celebration, Wine Festival, and Paws in the Park Pet Walk/Run all in development stages. The Finish Line Pub’s signature Full Throttle Friday Happy Hours and Sunday Brunches will return as well as monthly Motor(less) Nights on our world-class road courses.

Lee Brahin, Managing Partner states, “We have a world class facility here (NJMP). Since last year when we were voted one of the top five racetracks in the country, and the number two road course by racing fans, NJMP worked hard this past season to uphold the titles. NJMP is under the radar of the racing world, and it’s exciting to see the direction that we are heading for the future.”

F-Series GEARUP Challenge, Rotax U.S. Open, and the World Karting Association will highlight the Tempest Raceway Competition Karting Schedule in addition to a full slate of rental enduros open to the public.

“As President of WKA, I have witnessed kart racing grow at NJMP since day one so it is bittersweet to bring the largest race series, the Man Cup, to Tempest Raceway” said WKA President, John Ferris. “NJMP is a fantastic facility with a premier location, hence why we are looking forward to heating up the karting track in 2018.”

Tickets will be on sale soon at njmp.com! All events and dates are preliminary and subject to change. Children 12 and under are free to most events. For additional announcements relating to the 2018 race season at NJMP please visit njmp.com. You can also stay up to speed with NJMP by following on Twitter: @NJMP, Instagram: @njmotorsportspark, or becoming a fan on Facebook at New Jersey Motorsports Park – NJMP.