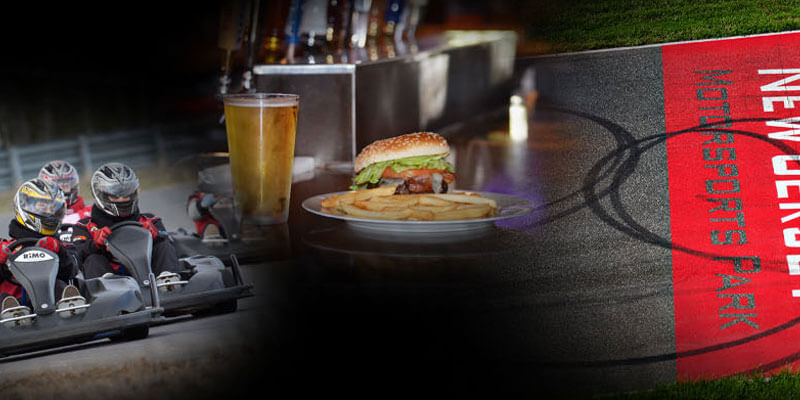 “New Jersey Motorsports Park continues to build and grow, creating a schedule packed full of exciting on and off track events. We look forward to hosting NJMP schedule mainstays such as the MotoAmerica Series, Trans Am Road Racing Series, American Historic Racing Motorcycle Association (AHRMA), and three Monster Truck and Thrill Shows,” said Verrastro. “The 2016 season was fantastic and included many improvements and additions to enhance the overall fan experience. From open paddock access, free parking, and low ticket prices we have seen record crowds throughout the facility. With that said, 2017 is going to be an exciting season full of surprises, with the return of the NASCAR K&N Pro Series and the addition of several new off track events, NJMP will spark the interest of non-racing fans and racing fans alike.”

The first race weekend at New Jersey Motorsports Park next year will be April 22, when it hosts the SCCA Devil in the Dark 12-Hour Endurance Race. One week later, April 29-30, two wheeled action hits the pavement when the Championship Cup Series comes to NJMP for the first of three race weekends throughout the season. The 24 Hours of LeMons: Real Hoopties of New Jersey returns to the 2.25-mile Thunderbolt Raceway May 13-14. Vintage motorcycle enthusiasts will be on track during the 5th Annual AHRMA Vintage Motorcycle Festival and Swap Meet July 14-16, offering a 60,000-square foot swap meet and festival atmosphere. The best amateur drivers race in wheel-to-wheel action during the SCCA U.S. Majors Tour July 21-23.

A fall classic and fan favorite, the MotoAmerica Superbike Championship of New Jersey, takes center stage September 8-10, as the top Superbike Racers in North America battle for the Championship title during round nine of the 10-round series. MotoAmerica Race weekend will feature a double-header racing schedule, the 7th Annual NJMP Bikini Contest, and three days of off track action.

The NASCAR K&N Pro Series East rolls into New Jersey Motorsports Park September 16, bringing intense door-to-door racing to the intimidating 12-turn Thunderbolt Raceway. The series introduces NASCAR fans to the next generation of stars, and the diverse mix of short tracks, road courses, and national series speedways appeals to a broad range of motorsports fans. NASCAR K&N Pro Series veterans have made a significant impact at the national level, including 2015 Daytona 500 champion Joey Logano, and 2014 NASCAR XFINITY Series champion Chase Elliott. The Vintage Racer Group (VRG), who believe a vintage sports car can be best appreciated by being driven in an environment for which it was intended, will showcase historic and vintage race and sports cars on Lightning Raceway during their annual event at September 16-17.

October 6-8, Weekend of Thunder returns featuring Trans Am Road Racing for the third consecutive year – a 70 plus car grid populated by Mustangs, Camaros, Challengers and Corvettes. New for 2017, they will be joined by the Atlantic Championship Series, F2000, and F1600 for their series-finale weekend of open wheel action.

In addition to all the on-track action, 2017 will boast a wide variety of off-track events for non-race fans and race fans alike.

“The versatility of NJMP makes us unique, and we are thrilled to provide a wide variety of on and off-track events to our fans in 2017,” says Brad Scott, Chief Operation Officer. “NJMP saw record crowds in 2016 with the addition of the NASCAR K&N Pro Series, and we look forward to providing another year of on and off-track excitement that our fans have come to know and love.”

The Zerbini Family Circus returns May 14-15 offering two days of family fun. NJMP will feature a Festival of Speed – Wheels & Wings Air Show Premier Viewing, May 27-28. This Memorial Day Weekend event will offer a premier viewing location to the Millville Airshow featuring the Blue Angels! The Festival of Speed will not only give spectators an amazing view of the high-flying action, but also includes on track action from the WERA Motorcycle Roadracing, and more. Rounding out the summer, KSR Motorsports Monster Truck & Thrill Shows will be churning up the dirt for three dates, July 28-30 delighting kids of all ages.

New Jersey Motorsports Park is planning the most anticipated off track event schedule to date with the addition of a Food Truck Festival, Beer Festival, Wine Festival, and Bark in the Park Pet Walk/Run all in development stages.

Lee Brahin, Managing Partner states, “We have a world class facility here (NJMP). This year we were voted one of the top five racetracks in the country, and the number two road course by racing fans. NJMP has placed itself under the radar of the racing world, and it’s exciting to see the direction that we are heading for the future.”

NJ Mini GP, F-series GEARUP Challenge, and the NJ Sprint Series will highlight the Tempest Raceway Competition Karting Schedule in addition to a full slate of rental enduros open to the public.

New for 2017, the US Open New Jersey will hit the go-karting track June 24-25. Keeping with the international Rotax scene, all seven Rotax MAX classes will be offered at the US Open including Micro MAX, Mini MAX, Junior MAX, Senior MAX, Masters MAX, DD2 MAX and DD2 MAX Masters. Spec Honda classes will include Junior, Senior and Masters.

“We are excited to host our US Open event at New Jersey Motorsports Park in 2017,” stated Maxspeed Entertainment Race Promotions Director, Garett Potter. “There is a large contingent of Rotax and shifter kart racers in the Northeast, and this will give some of the regional drivers a taste of running in a national level event. NJMP is the perfect host for our world-class event, as the facility is ideally located and the track offers great, action-packed racing.”

Don’t miss out on great deals this holiday season – tickets on sale starting Cyber Monday, November 28 at njmp.com! All events and dates are preliminary and subject to change. Children 12 and under are free to most events. For additional announcements relating to the 2017 race season at NJMP please visit njmp.com. You can also stay up to speed with NJMP by following on Twitter: @NJMP, Instagram: @njmotorsportspark, or becoming a fan on Facebook at New Jersey Motorsports Park – NJMP.