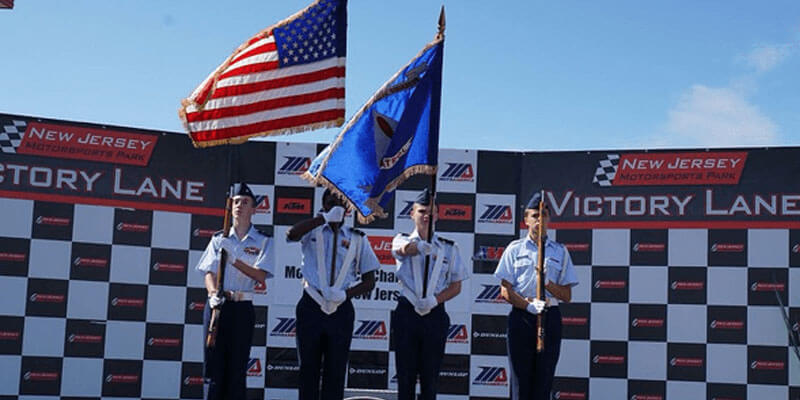 – In honor of 9/11, New Jersey Motorsports Park (NJMP) and MotoAmerica are saying thank you to all first responder and military men and women by offering a 10% discount and tribute ceremony during the Yamaha Superbike Challenge of New Jersey, September 9-11, 2016.

MotoAmerica will visit NJMP for its final race of the 2016 series and the crowning of its series champions. The series will conclude on the 2.25-mile Thunderbolt Raceway, a track that features 12 corners and a half-mile straightaway. Event organizers have a weekend jam packed with excitement planned on and off the track!

Tickets are available online at NJMP.com. To receive discount, ticket buyers will enter the discount code “FIRSTRESPONDER” or “MILITARY” at checkout. Fans will be required to present proper ID along with their tickets upon arrival to the event.

“We will never forget what happened on 9/11,” said Mark Verrastro, General Manager of New Jersey Motorsports Park. “Never forget the lives that were lost, and never forget the men and women who sacrificed their own lives, if not their safety, to go in and save others – this is just one way we are saying thank you.”

First responders and military members are invited to participate in a tribute ceremony during the Dunlop Fan Walk:

Fans have the opportunity to purchase small American Flags for $1 throughout the weekend to be placed in a memorial location on NJMP property in honor or 9/11. All proceeds will go to the National September 11 Memorial and Museum.

“This is an opportunity for us to recognize and celebrate our everyday heroes,” said MotoAmerica President, Wayne Rainey. “They show up in the face of danger and disaster because they are committed to serving others.”

You can also stay up to speed with New Jersey Motorsports Park by following on Twitter at @NJMP or becoming a fan on Facebook at Facebook.com/NewJerseyMotorsportsPark.

Sitting on more than 500 acres in Millville, N.J., New Jersey Motorsports Park is the premier motorsports entertainment complex in the Northeast. NJMP is conveniently located near Philadelphia and New York City, offering diverse and dynamic attractions both on and off-track. The park includes three world-class road courses, Thunderbolt, Lightning, and Tempest Raceway, a motorsports country club membership program, one of the top outdoor karting complexes in the U.S., 10 acres of paintball fields, concert and festival space, overnight accommodations, and real estate development opportunities. Also on the property, a clubhouse features meeting space, bar/restaurant and built-in pool.