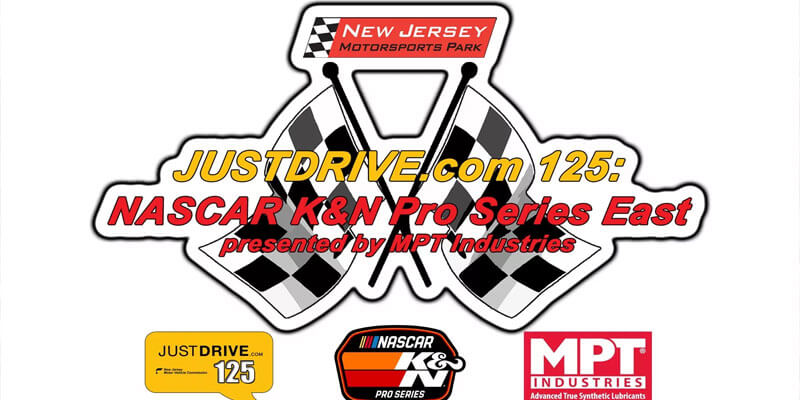 The official event name to be the “JustDrive.com 125”

– JUSTDRIVE.com is taking the fast lane as the returning title sponsor of the NASCAR K&N Pro Series race on June 16 at New Jersey Motorsports Park (NJMP). The public service sponsorship will give JUSTDRIVE.com significant exposure in conjunction with marketing of this major race event, as promotions will appear in a wide range of regional media markets. This is the third consecutive year the organization has signed an agreement with the Millville facility. So what exactly is JUSTDRIVE.com? New Jersey is taking aim at texting and talking while driving with a public education campaign that uses television, print, radio and billboards to warn against multi-tasking behind the wheel. The site, developed by the New Jersey Motor Vehicle Commission, provides citizens with an online forum to share stories about driving behavior. This partnership will include signage throughout New Jersey Motorsports Park that will help “drive” the message against distracted driving for the entire 2018 season. Announcements driving the message will be made during each spectator event throughout 2018 and representatives from JUSTDRIVE.com will be on hand at these events to help educate the public about the dangers of risky driving behaviors.

“We’ve had a great history of sponsorship partners here at New Jersey Motorsports Park, and we’re excited to have JUSTDRIVE.com return for the third year in a row,” said NJMP Chief Operating Officer Brad Scott. “Our facility is honored to be partnering with such a great initiative as JUSTDRIVE.com. The naming rights deal will give this campaign great exposure with the NASCAR media outlets and NBC Sports Network coverage of the event.”

The JUSTDRIVE.com 125 is set for June 16, the third annual NASCAR race for Thunderbolt Raceway. In addition to the tire burning action on track, fan experiences include a fan walk on pit lane, open paddock access to the garages and drivers, a kid’s zone with inflatables, vendors and more. Children 12 and under are free and tickets start at $15.

“We are thrilled to be joining with NASCAR and New Jersey Motorsports Park to present the JustDrive.com 125 for the third consecutive year,” said MVC Chair and Chief Administrator Sue Fulton. “Last year’s event had a tremendous impact on our efforts to educate motorists about the dangers of this reckless behavior. It’s not enough to simply tell people about fines and penalties – we all have to work together to reach drivers before they get a ticket or are involved in a crash. Our message is simple: be safe – just drive.”

For additional announcements relating to the NASCAR race at NJMP please visit www.njmp.com. Stay up to speed with NJMP by following on Twitter: @NJMP, Instagram: @njmotorsportspark, or becoming a fan on Facebook at New Jersey Motorsports Park – NJMP.

The New Jersey Motor Vehicle Commission’s Just Drive public awareness campaign seeks to educate drivers in New Jersey about the dangers and consequences of using a handheld device while driving. In addition to risking the lives of themselves and others on the road, offending drivers face a minimum fine of $200 for the first offense, a minimum fine of $400 for a second offense, and a minimum fine of $600 plus a possible 90-day license suspension and three motor vehicle penalty points for the third offense. For more information, visit www.justdrive.com.