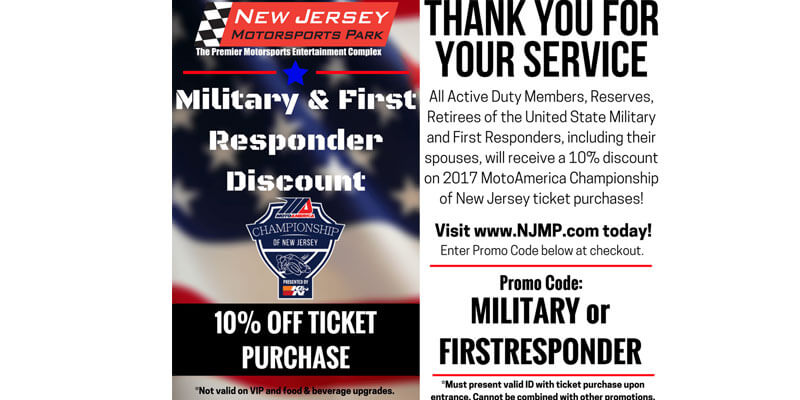 – For the second consecutive year, New Jersey Motorsports Park (NJMP) and MotoAmerica are saying thank you to all first responder and military men and women by offering a 10% discount and tribute ceremony during the MotoAmerica Championship of New Jersey presented by K&N Filters, September 8-10, 2017.

MotoAmerica will visit NJMP for round nine of the 10-round series in 2017, heating up the 2.25-mile Thunderbolt Raceway, a track that features 12 corners and a half-mile straightaway. Event organizers have a weekend jam packed with excitement planned on and off the track!

Tickets are available online at NJMP.com. To receive discount, ticket buyers must enter the discount code “FIRSTRESPONDER” or “MILITARY” at checkout. Fans will be required to present proper ID along with their tickets upon arrival to the event.military_first responders 2017

“We received an overwhelming positive response from fans during the event last year,” said Mark Verrastro, General Manager of New Jersey Motorsports Park. “Offering a tribute ceremony and discounts for men and women who are everyday heroes, is a way for us to say thank you.”

First responders and military members are invited to participate in a tribute ceremony during the Dunlop Fan Walk:

Fans also have the opportunity to purchase small American Flags for $1 throughout the weekend to be placed in a memorial location on NJMP property in honor of 9/11. All proceeds will go to the National September 11 Memorial and Museum.

For tickets and additional event information on the MotoAmerica Championship of New Jersey presented by K&N Filters, please visit NJMP.com. Advance online ticket buyers receive complimentary VIP paddock parking, designated quick access gate entrance and up to $15 off per ticket. You can also stay up to speed with NJMP by following on Twitter: @NJMP, Instagram: @njmotorsportspark, Snapchat: njmotorsports, or becoming a fan on Facebook at New Jersey Motorsports Park – NJMP.